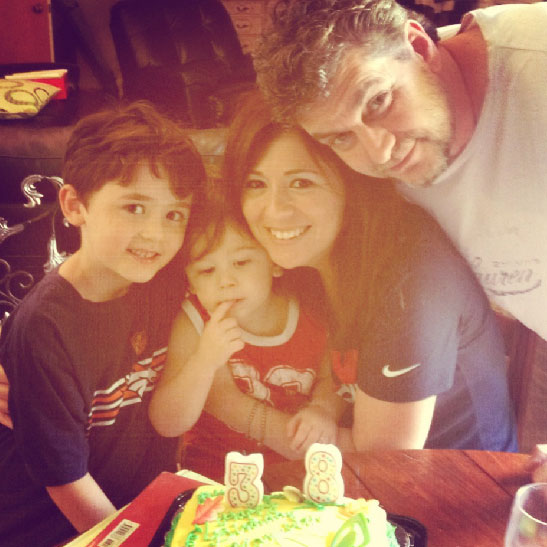 My husband, Eric, was diagnosed at 43 years old with non-smoking Alk positive stage IV lung cancer in March 2012. We had been married almost 5 years and had a 4 year old son and a six month old son. His only symptom was a lump discovered in his neck that was biopsied to reveal adenocarcinoma. His pet scan revealed it had spread everywhere from lymph nodes to bones to spleen to liver to brain. Since his diagnosis, he has been on chemo which worked for a while and had targeted brain radiation. We have traveled to Denver and Portland to meet with specialists who are on the forefront of battling this disease. In August 2012, scans revealed multiple brain lesions. He underwent WBR in October 2012 and was forced to switch chemos since the other one stopped working. In April 2013, he was lucky enough to qualify for the LDK378 trial here in Charlotte and has had great response except this past August where it was revealed the brain lesions have begun returning. While the rest of his disease seems stable, the brain is what we now watch. His next scans are in a week right before Thanksgiving. We are not sure what the future holds and if this is the last holiday season he will see with his young sons. If there was half the awareness of screening there is for things like breast cancer, my husband and boys' father would have had a fighting chance. Now all we can do is borrow time and live scan to scan. A cure is an unattainable dream that can be reached for so many others with cancer but for people with lung- the stereotype and stigma signs their death certificate. My husband never smoked- he deserves to see his boys grow up. Awareness is the key to saving lives.