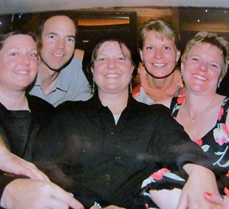 My story of how I figured out I had lung cancer: Early February of 2004 I was having extreme anxiety and panic attacks. I ended up in ER twice because of it. The second time the anxiety was so severe, I thought I was having a heart attack. The doctor said that my heart was fine but the x-ray revealed a small spot on my right lung. She asked me if I was a smoker and I told her I had never smoked. She told me that anyone can get spots on x-rays, especially in MN because of the melting and freezing temperatures. She suggested I follow up with my primary doctor, although she didn't seem too concerned about the spot. After seeing my doctor, I was set up for a CT scan. The scan revealed that the spot had gotten bigger since my trip to the ER. I was quickly scheduled for a biopsy, and sadly, the results revealed I had non-small cell lung cancer. Later I learned that the pathology report showed the cancer had spread to my trachea and bronchi lymph nodes. This result changed my stage 1A diagnosis to 3A. I underwent surgery to remove the middle lobe of my right lung followed by five months of chemotherapy, and finally radiation. Those were scary, difficult days but I fought hard and won. I am happy to say, I will be ten years cancer free this coming St. Patrick's Day. I thank God every day for the gift of health and life. My cancer journey, although difficult, taught me how precious every day is and not to sweat the small stuff.