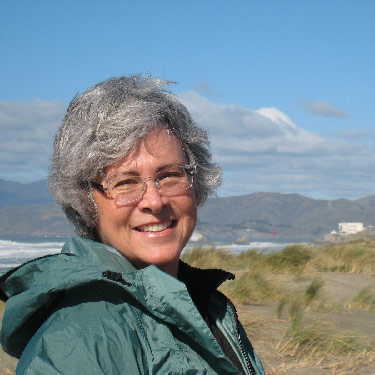 I was diagnosed in 1999. My diagnosis was a HUGE surprise, and it was not easy to obtain.

I had been busy planning my wedding and also had a busy career and small children. I had forgotten to get a flu shot. On my honeymoon, I caught the flu. My husband insisted that I have a chest x-ray.

The x-ray showed something in my upper right lung the size of a golf ball. Because I had never smoked and was only 41 years old, the doctors thought I had a fungal growth or round pneumonia. They tried unsuccessfully to get a biopsy via bronchoscopy and CT-assisted needle biopsy.

Finally, in May 1999, I traveled to a major cancer center. The radiologists there said that whatever was in my upper right lung was also in my left lung, but much smaller. The surgeon performed a video-assisted, thoracic surgery to remove the lobe of my left lung that contained the smaller tumor. It was non-small cell lung cancer. It did not appear to have spread outside the lungs. Biopsies of my lymph nodes were inconclusive because I did not have lymph nodes in all of the normal places.

In June 1999, I had a traditional thoracotomy to remove the upper lobe of my right lung. I was in the hospital for two weeks. The staging of my cancer was difficult because of the lack of lymph nodes. The doctors were split on whether I should have chemotherapy. The only available statistics, based upon meager data, showed that because I had lung cancer in both lungs, I had a zero percent chance of surviving five years.

I decided that the statistics were unreliable and that SOMEONE had to live for more than five years. I had 5 or 6 rounds of traditional chemotherapy---tumor typing tests were not common then. Life went on. I went back to exercising. My lung capacity came back to a very great extent, because my remaining lung tissue expanded.

They say I am cured.

I want people to know that the only statistic that matters is the one that you live to create. Every case is different. Every person is different. If you are not comfortable with your doctor, go to another one. Go to a major cancer center, if possible. Speak up. No one who matters cares whether you smoked, except as it may be necessary to know in order to provide treatment. No one deserves lung cancer. Everyone deserves to have a fighting chance when they are diagnosed.