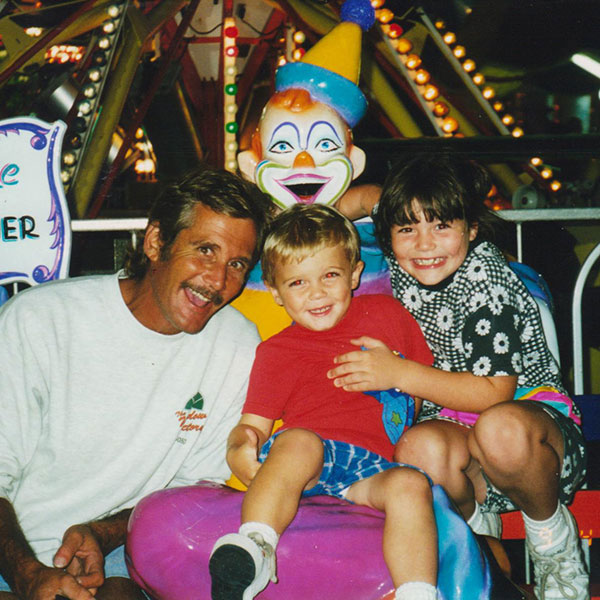 My husband Larry was officially diagnosed with stage IV lung cancer at the age of 44 on August 12, 2003. Larry's ordeal started in June when he thought he broke his little toe. Then I discovered the bottom of his foot around the toe was almost black and cold. He never felt a thing, just that it was itchy. Finally he went to the doctor and was sent to hospital. They did some kind of emergency test and found a blood clot near his groin area so a stent was put in. They never did a chest x-ray. It was determined he had an arterial disease related to smoking. Finally after 2 more hospital trips they did a chest x-ray and found a "peculiar looking spot on his left lung". We hoped for the best on the day of surgery. It was determined he had non-small cell lung cancer, stage IV. Larry had a few treatment options and we opted for a clinical trial. Larry said "If it doesn't help me maybe I can help someone else". Our team of doctors were great as well as the clinical trial nurse. The second week of November he was having severe headaches. Cancer was spreading at the base of his brain. Radiation was suggested but not recommended. Two days after final treatment we went to doctor who said "I am SO SORRY to have to tell you this but I think we should consider hospice". Hospice was set up the next day at home. Larry said from the beginning if things didn't go "our" way he wanted to be at home surrounded by family and friends in the house that Larry built. Phone calls were made and visitors came. Our Methodist pastor came by with communion. By 2am Saturday he said he was tired and ready for bed. He was getting agitated and he took himself off the oxygen. He looked at me and said "Just be happy and take care of our kids. I am sorry." It was 5:55am. Larry was in and out of it. I told him it was time to go. I loved him. I thanked him for the 15 years we had and the beautiful house we designed and built together. The kids and I will be alright. I put my hand over his heart. He fluttered his eyes. I said "I love you honey." He said "For always". A golden heart stopped beating. Three days after our 15th anniversary it was over. Larry never really had a second chance. Services were held the day before Thanksgiving 2003. This November 19th would've been our 25th wedding anniversary. This November 22nd is the 10th anniversary of his passing. Our daughter is now 21 years old and our son, named after his daddy, is 17 years old and so much like his daddy!