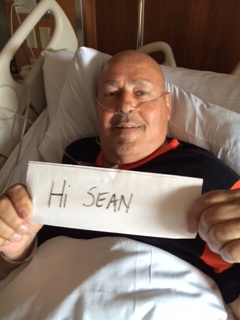 My husband, Gary, was diagnosed with lung cancer last December. He had virtually no symptoms. He was having knee surgery and in the course of preparing for that, the spots on his lungs were found. He was diagnosed with stage 4 large cell neuroendocrine lung cancer. Of course after the initial shock of finding this out and facing your own mortality, we searched for any and all options to save his life. His doctor was hopeful that with a strong chemo regimen he could live up to a year and a half. This was unimaginable to hear, as we were the couple that everyone always said was so in love and on an eternal honeymoon. Gary smoked for 30 years and quit smoking in 1995 when we met, I would not date a smoker and he quit on the spot.

Gary powered through 6 strong regimens of chemo, as well as the many other trips to the hospital for transfusions and pneumonia. The knee no longer was the issue. Challenges along the way included trying to figure out how to get Gary the care he needed--from rides to chemo and doctor's appointments, to the mental health care that is required for not only him but for me as well. Friends and family play an important role in this journey.

Gary became ill with pneumonia in late June and on July 5th went into the hospital to try and knock that out of him. He was accepted into a clinical trial on July 2nd. The trial was showing significant results and we were thrilled. We needed to get him through this bout of pneumonia so we could get him going on the clinical trial. The lung cancer won. Gary lost his battle with lung cancer on July 11th, 2014. He did not want to die -- he had so much to live for. The photo is a note to his grandson, Sean, who lives in Atlanta.

I was surprised to hear that imaging of the lungs is not a normal part of healthcare. It seems like you only get scanned if you crack a rib or something. With lung cancer having such a high mortality rate, you would think a chest CT scan would be a regular part of our healthcare, similar to a mammogram, etc. I want others to make this a part of their health regimen, even if it means paying for the scan. Especially if anyone in your life is or was a smoker-- protect yourself.

Living without the love of my life is unspeakable. I pray often that lung cancer is someday something that no one has to live through. Stop smoking, encourage ones you love to stop smoking!!!