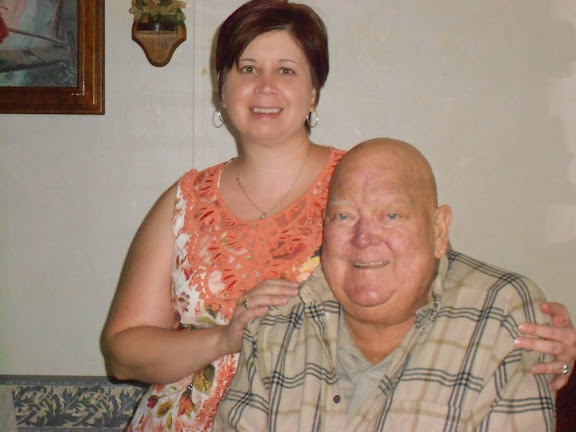 In December 2011 my dad, Gaylon, was diagnosed with stage four non-small cell lung cancer. By the time he was diagnosed it had spread to his bones, other organs and his brain. He had tumors in his brain that caused him to be unable to speak clearly and he was unable to read. He was a fiercely independent man who was robbed of this; a business owner, who had to rely on others and eventually sell his legacy. He went through numerous rounds of radiation for the brain tumors and chemotherapy for the cancer. Each having their own devastating side effects. In the six months he fought he had a titanium rod inserted in his leg where the cancer had destroyed the bone, a seizure that caused him to be put into a medically induced coma, and surgery to insert a net to catch blood clots.

Through it all he smiled. He didn't complain. He never threw himself a pity party. As his only daughter I was falling apart on my own time and remaining strong when I was with him. He fought hard. He never gave up. He never complained. He went through all the chemo so he could try and get a little extra time with his family, even though he knew it wasn't going to change the end result. I will always remember eating junk food on the couch to help him gain weight so he could undergo more chemo treatments. Oreo's and fried pies. Smiles from dad are cherished treasures that I carry in my heart and bring happy tears to my eyes.

In May of 2012 he couldn't take the pain anymore and he finally succumbed to the cancer. He is my inspiration to be better, complain less and love life. He is my hero and he raised me to be strong like him. I tell his story, my story, our story to help raise awareness of lung cancer. This deadly cancer is under the radar yet it is absolutely devastating.