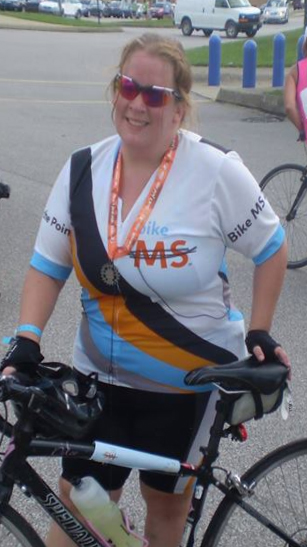 I'm an avid cyclist. Last autumn, my husband and I moved to a place that was at the top of a small hill. I rode my bike through most of the fall and winter months, and soon it got easier and easier to bike up the hill. I was getting stronger.

In April, I started having some shortness of breath. It was consistent, but worse when I was exercising. Before long, it became very difficult to bike up the hill I had only recently been able to scale with ease. Since I did not have a primary doctor, I went to an urgent care clinic. Within minutes of me describing my symptoms and when they started, the doctor said that I had asthma.

I kept riding my bike, as of August I had well over 1000 miles logged for the season. A week or so later, I finally had a visit with a primary care physician. I told the doctor about my breathing issues. She asked if I had any other issues at the time. I wasn't going to mention it initially, but I ended up telling her that my leg was sore. I told her of the long bike ride I'd completed not two weeks prior, and that I assumed it was just a tight muscle. The doctor sent me for an ultrasound to rule out a blood clot. They found one, so I was sent to the ER.

In the ER I had a CT scan. Shortly after the scan I was told that not only did I have the clot in my leg, but that there were several clots in BOTH lungs, as well as an unknown mass in the bronchial tube in my right lung. It was determined that most of my right lung had also collapsed and was likely full of infection. As a result I was started on blood thinners and antibiotics immediately.

While in the hospital I had several scans and tests and, before long, it was determined that I had lung cancer. The cancer was causing the blood clots they'd found. I was told I should meet with an oncologist in a week or so. The oncologist said that, due to my age and non-smoker status, she wanted to send samples of the tumor for genetic testing and it was ALK-positive adenocarcinoma and I'm currently undergoing treatment.

Being as active as I was, I didn't think that I'd ever have to worry about lung cancer especially because I don't smoke. I waited so long to get a primary care physician because I was rarely sick. Please, see your doctor for regular health screenings and be sure to discuss any concerns you have - no matter how insignificant you think they may be. Stay positive, but be realistic. Yes, you will probably have bad days and that's okay. It's okay to rely on people for help, and it's okay to cry or get angry, but never give up!