As the American Lung Association celebrates Women's History Month this March, we remember the legacy and accomplishments of one woman who was a pioneering public health hero – Emily Bissell.

Emily was a lifelong activist and social worker, best known for her groundbreaking work in fundraising for tuberculosis (TB). At the turn of the 20th century, tuberculous – also known as consumption – was the leading cause of death in the U.S. Despite the devastation caused by the disease, TB sanatoriums across the country only had the resources to care for a few patients at a time. 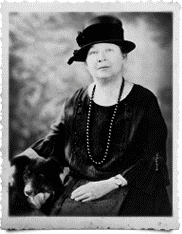 In 1907, Emily took action to help her cousin – a physician at a small sanatorium in the woods of Delaware. With the hopes of raising $300 to keep its doors open, she launched the Christmas Seals campaign.

Emily and a team of volunteers designed the holiday stamp and set out to raise money by collecting a high volume of small donations. Selling the stamps at a penny apiece, they successfully raised $3,000 for the fight against TB in the first year alone. By 1916, Christmas Seals had raised more than $1 million, all through donations of $1 or less.

The seals soon became a symbolic way for others to show their support for lung health.

In 1944, the world saw the first ever effective drug treatment for TB - streptomycin. Shortly after, in 1950, with the research funding from the American Lung Association Dr. Edith Lincoln found isoniazid and prevented the further spread of infection when given to household members of TB patients. By that time, the disease went from being one of the leadings cause of death in North American and Europe for nearly two centuries, to number seven.

A poem was also included with the
purchase of Christmas Seals:

"Put this stamp with message bright
On every Christmas letter;
Help the tuberculosis fight,
And make the New Year better.
These stamps do not carry any kind of mail
but any kind of mail will carry them."

Throughout the next several decades, and until her death in 1948, Emily continued her advocacy for lung health and served as an active leader of the Christmas Seals campaign. Her grassroots activism provided a blueprint for strategic cause campaigns, empowering citizens to address public health threats by partnering with organizations to advance awareness and drive research funding. Since its inception, similar campaigns have been found success in public support, including the American Lung Association's LUNG FORCE initiative, which raises both awareness and funds on behalf of those affected by lung cancer – the leading cause of cancer deaths in both women and men.

Today, the fight for healthy lungs is more important than ever as the battle against dangerous air pollution and lung disease endures. While TB is now largely controlled in the U.S., it remains a global health issue. The American Lung Association continues its work to raise awareness and funding for tuberculosis research. With the help of history makers like Emily Bissell, anyone can support the American Lung Association in its crucial mission for world free of lung disease.