The world would go on whether I crossed the finish line or not but, to me, this was big-time important. As in, “Here’s my best shot at finally proving what I’m made of” important. So, when my legs started cramping, I heard myself cry out, “Oh no, not again!”

My athletic prowess peaked in the fourth grade. I was small for my age, but skillful and fast, or so I thought. When I started fifth grade at a much larger school, I soon learned I had been a big jock on a small field. During recess, my kick-ball skills suddenly seemed quite pathetic compared to the bigger, stronger boys that now seemed to occupy every corner of the playground. 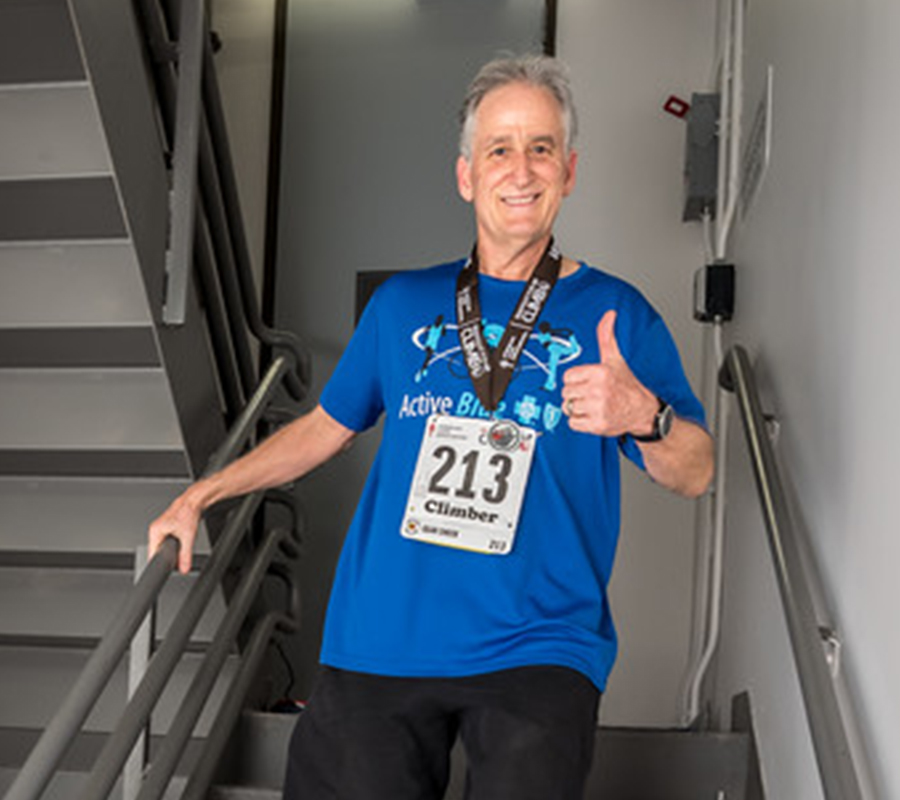 When I joined the junior high school track team, the coach penciled me in for the 100-yard hurdles. Up until that point, my experience jumping hurdles was, well, zilch. The whistle blew, and by the time I reached the first hurdle, it was already painfully obvious that I had settled into last place. I was trying to catch up to the other runners and, in my haste, didn’t clear the hurdles. I face-planted twice. Or was it five times? I couldn’t remember, as my embarrassment hit full stride even if my legs never did. By the time I crossed the finish line, the only recognition I received for my performance was two bloody knees.

My scabby knees healed but the emotional scarring persisted until I finally built up enough courage to play organized sports again. During my senior year of high school, I joined the boys swim team and routinely logged last-place finishes in the pool. In college, I played a few intramural sports, and finally got my first official sports win. I signed up for my dorm’s intramural swim team and picked the 25-meter freestyle. And oh, the triumph! Full disclosure - turns out I was the only person who signed up for the race. Competing only against myself, I leisurely alternated between the freestyle and the backstroke, waving to the crowd, spitting water like a fountain and imitating synchronized swimmers. I might as well make fun of myself before others had the chance.

As an adult, I played on a few recreational softball teams, ran some 10Ks, then 5Ks, then 0Ks when my body said “enough.” Today, at age 62 and with a frozen shoulder, I can neither throw a baseball nor swim a single stroke of freestyle. But I can climb stairs. I started stair climbing for exercise out of convenience — finding it harder to get to the gym after our fourth child arrived. I worked in a high-rise building in Detroit, and it was a safe indoor fitness activity, especially during harsh Michigan winters. Between the winter stair climbing and outdoor cycling, I had built up decent cardio and leg strength.

Climbing for a Cause

Growing up, both of my parents were smokers, and as such, they suffered for many years with COPD. Though the diseases were never truly debilitating, in 2005 at just 75 years old, my mother passed away from respiratory complications. A few years later, my father was diagnosed with small cell lung cancer. After informing his doctor that he was having trouble completing simple tasks I rushed him to the ER where testing confirmed that the disease was progressing rapidly and had spread to his brain and other parts of his body. Only six weeks after admitting him to the hospital, in August 2009, he passed away.

It was while I was mourning his loss that I first discovered the American Lung Association’s Fight For Air Climb. The annual stair climb event is held in high-rise buildings throughout the U.S. to raise awareness and money to fight lung disease and other associated illnesses. This seemed like a great way to honor my parents and so I signed up for my first stair climb event.  I would go on to partake in many more climbs, with my parents' stories being a driving force pushing me to not only participate, but to finish in the top 10 in my age group each year. 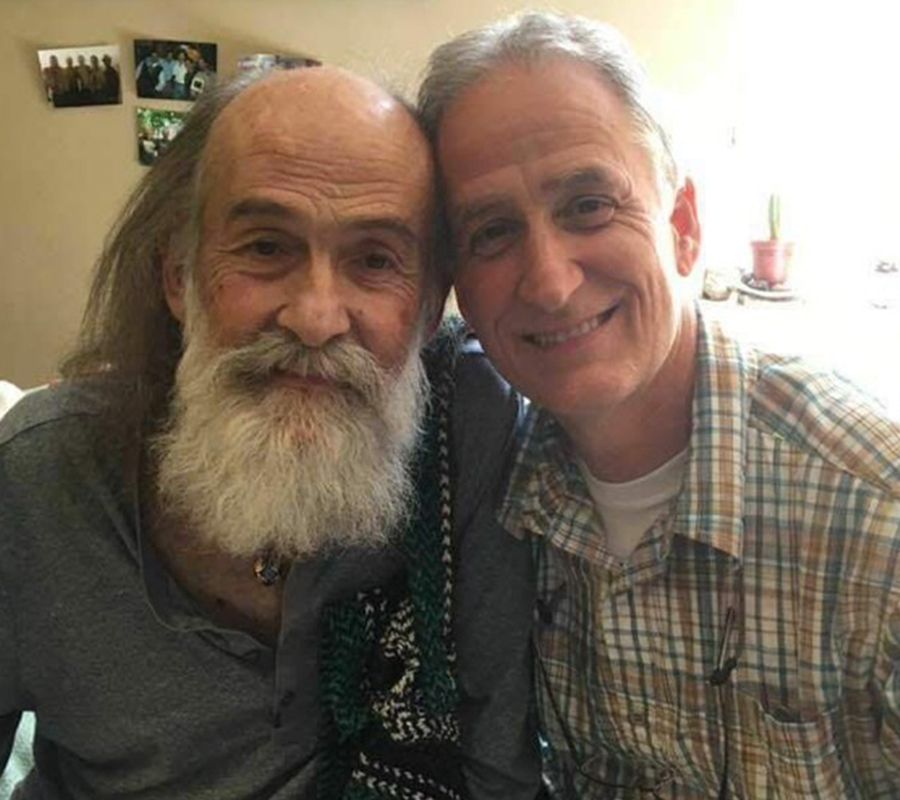 Marvin and his brother

In 2018, the Lung Association offered a more challenging climb option, the vertical mile. It was around this same time that my brother Mike was diagnosed with lung cancer. Visiting him in Colorado, I saw the devastating toll the disease was taking on his body. He never complained about the pain he was experiencing, and he passed away a few months later. It was in memory of “Mile High Mike” that I threw myself into training.

The vertical mile was an endurance challenge where climbers go up and down 28 floors 15 times, plus 3 more floors, which totals one mile up and another mile down. The challenge had to be completed in 3 hours. To finish under the time limit, I had to average 12-minute laps or 5 laps every hour. I trained hard, climbing nearly 7,000 floors over a 4-month period. When the vertical mile challenge started, I felt confident, and completed the first 5 laps in under an hour. But then I started feeling “off,” and I began to slow down. I noticed my heart rate was much higher than usual, but I attributed it to an unreliable fitness watch. My legs started feeling heavy, and soon I was experiencing leg cramps. Lap 12 took 19 minutes and I was falling further behind. I kept pushing myself, but the reality was, it was over. When I came down after finishing lap 14, it was 10 minutes past the 3-hour limit. I had climbed 395 flights of stairs, but my climb had ended. There would be no victory.

After the climb, I struggled to experience the self-satisfaction that would usually come from climbing. I had set a big goal for myself, and that goal was going to show me what I was made of, what I had inside me. What I had inside me was, “Nice try, but you didn’t quite make it.”

For months, I wasn’t sure whether I wanted to put forth the effort to attempt the vertical mile climb again, but then I’d think of my brother’s courageous fight and how his choice to keep going was taken from him. I threw myself into training, climbing nearly 19 miles of stairs over 5 months. I focused more on strengthening my core, building up to where I could do 3-minute planks and wall-sits. I reminded myself that my workout pain would be over in minutes, but my family members were not so lucky. Thinking of them and all those who struggle every day with lung disease motivated me to try harder, eat healthier and even lose 10 pounds. I was ready!

I also decided this would be my last attempt at the vertical mile climb, no matter the outcome. I was the oldest climber in the event, and with all the intensive training, my body was feeling beat up. I knew fitness would continue to be an important part of my life, but I decided that after one more attempt at the vertical mile I would dial it back.

Angel in the Stairwell

The climb day arrived and again, I started strong. After 5 laps, I was under the 1-hour pace, and it increased each lap. So did my confidence. But during lap eight I started feeling discomfort in my legs. I intentionally slowed my pace, climbing each of the next 2 laps in more than 12 minutes. But the pain in my legs grew and by lap 11 there was no denying it: my quads were cramping and I heard myself cry out loud, “Oh no, not again!” Thinking my cramps may be caused by dehydration, I started consuming larger amounts of my energy drink. But the cramping continued, and my pace slowed dramatically.

Climbers who had been shouting words of encouragement in passing were now looking at me and asking, “Are you OK?!” I initially shrugged them off, until I finally said to a few, “No, something’s wrong!” I stopped climbing a few times to massage my legs. I’d make it to the top and get some relief on the descent, but as soon as I started climbing again the pain intensified. Finally, I stopped and sat down, feeling once again defeated. A few climbers stopped to assist me and though I was deeply touched, I didn’t want my problem to ruin their day. So, I quickly thanked them for their concern and told them to keep going.

Except for one climber.

I’m convinced Jessica stopped to help me through a series of divine circumstances. Had my friend Doug not kept after me about getting new running shoes, I never would have met Stephen, the salesman at the running store. He never would have told me about his friend Jessica who was also doing the vertical mile climb, and I would have likely not introduced myself when I saw her at the climb two months later. And without that connection, she might have climbed past me as I sat on those steps, my legs shaking. But all of those things did happen, and Jessica stopped to help.

When she saw I was cramping, she offered me some electrolyte salt. I wasn’t sure how soon it might help, if at all, but I resumed climbing. I fell behind pace for the first time, with just two laps to go. Time was running out on the clock and on my chance to prove myself, and my legs were feeling like rubber. I stopped Jessica each time we passed, begging for more salt. She was my angel in the stairwell.

Lap 14 was my first sub-twelve-minute lap in over an hour. I could still make it, one lap to go. The cramps in my legs were finally starting to subside. When I made it to the top of the last lap, I felt giddy inside as I realized I was going to make it down in time. As I approached the first floor, I thought of last year’s ending and the heartache that consumed me. This time my heart was soaring as I came out of the stairwell, crossing the finish line in 2:59:30, just 30 seconds before the time-limit! I was met with high-fives and cheers. I received a lengthy group hug and my emotions overwhelmed me. Tears poured down my face, no doubt aided by the genuine compassion I had received from my community of vertical milers.

COVID-19 has altered our lives dramatically. My big feat now seemed quite insignificant in the scheme of things. But, at the same time, my personal triumph and the compassion shown to me along the way, helped solidify my belief that there is more inside us than we know, and we’re even stronger together. And that’s the biggest trophy of all. 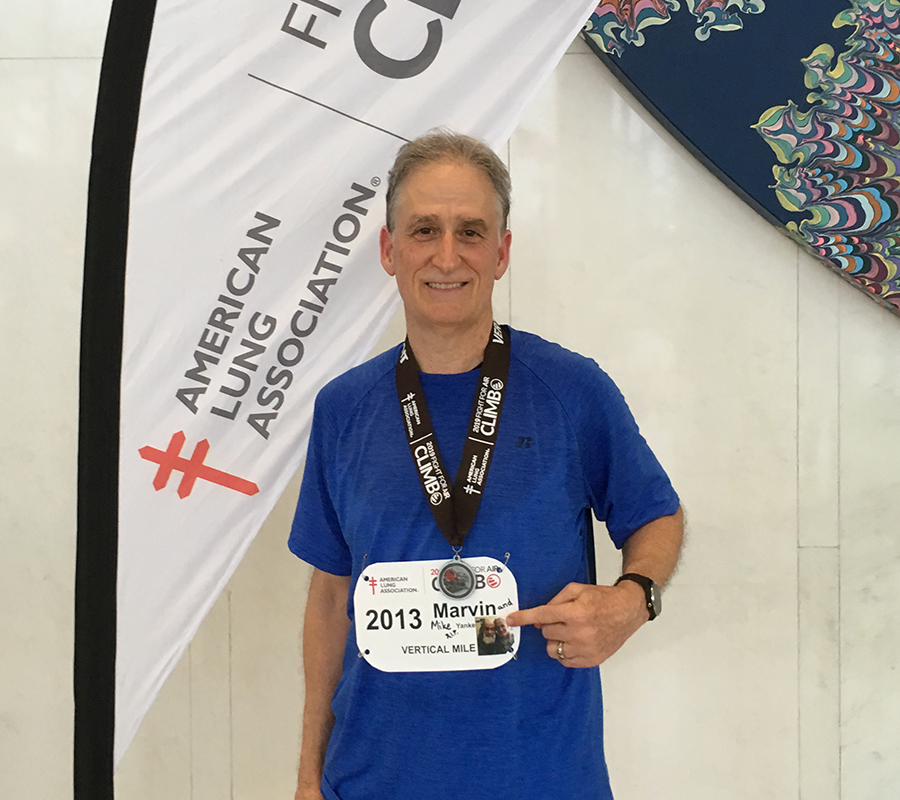