From the Frontlines: An Update from Navajo Nation

I have been a respiratory therapist for over 28 years. In the early part of March, before the COVID-19 outbreak began ravaging the United States, I could be seen roaming the halls of my hospital telling my favorite social distancing jokes about the relative risks of elbow bumps, handshakes or cheek kisses. Roaring laughter would ensue. Today, the jokes are not funny. I stopped telling them.

The Navajo Nation where I work is nestled in Northern Arizona and spans the Four Corners region including tribal territory in Utah and New Mexico. It wasn’t until the first positive case for COVID-19 was announced in Kayenta, AZ on March 16, that we began to see how the pandemic would affect us. It took only one week for the caseloads to double, triple and then become out of control.

Our Cardiopulmonary Department, when fully staffed, is comprised of ten full-time respiratory therapists (RTs), including myself. Unfortunately, when the pandemic cases started to rise, we were only staffed with eight RTs. The two new hire offers we had made unfortunately declined to come on board. The team, in desperate need of more RT help, was devastated. But we worked together to institute a new staffing plan with a four-on/ four-off rotation to cover the increased need. We typically average 12 ventilator patients per month, a fairly small amount, even for a small, rural, 72-bed hospital. But with the influx of COVID-19 patients, by the end of March we had acceded that number by almost double. Patients were coming in at all times of day and night.

With tensions high, new teams within the hospital emerged, including an epidemiology team, the Incident Command Structure (ICS), a rebirth of the ethics committee and more. As fast as these teams emerged, so did changes. Everywhere and everything was in a constant state of change. For several days in a row, I would begin our morning huddle with the phrase, “This is how it is today.” One day a triage tent popped up. Then, new maps were drawn restricting patient flow. Patients were screened and tagged with green and red stickers in their cars before they were allowed in the building. Those marked red required additional triage and screening. Whenever possible, people were sent home to continue monitoring their symptoms where risk of transmission is lowest.

Everywhere and everything was in a constant state of change. I would begin our morning huddle with the phrase, “This is how it is today.”

As a former Field Medical Service School (FMSS) trained Navy Hospital Corpsman, I was genuinely impressed by the infrastructure changes made to the hospital in such a short period of time. At the end of one ICS meeting we came up with a plan to convert our six-bed intensive care unit (ICU) into a negative pressure unit – a design to help prevent the spread of COVID-19 from an infected patient to others in the hospital. As we exited the meeting, I received a call that we were going to intubate a COVID-19 patient in the ICU. The team scrambled to execute the plan and within two hours, facilities management changed the ICU airflow and installed a plastic wall doffing station for people to safely exit the ICU and remove their personal protective equipment (PPE). We had a lot of work to do and it was getting done at a feverish pace.

Fear in the Community

Around mid-March, after the first reported Navajo Nation case, patients began to flood the hospital phone lines, asking questions and requesting a COVID-19 test. With only 43 test kits assembled, we had to reserve these for the patients at greatest risk. This caused great outrage among the community members who were understandably confused and scared. In fact, at one point we were put on alert because callers who were informed they did not meet the criteria for a COVID-19 test and were encouraged to stay home, began to make serious threats against the hospital. That put us on lockdown with security officers dispersed to all the entrances of the hospital to keep all employees and patients safe. The verbal threats were not acted upon, but illustrate the panic felt by many members of the community.

Soon after, announcements were made to the community by the president of the Navajo Nation. The hospital also had to convey messages to the community about how to stay safe. The most important and the hardest one for the community to accept was stay at home!” It became an official order on March 23, followed by a mandated curfew issued on March 29.

Throughout March, foot traffic in the hospital remained high. Everyone was working hard and trying to stay one-step ahead.  The RT staff really excelled during this crisis and showed immense professionalism and calm, despite the chaos surrounding them. Every department was in need of staffing and supplies. As of today, the Navajo Nation had reported 321 positive cases and 13 deaths. 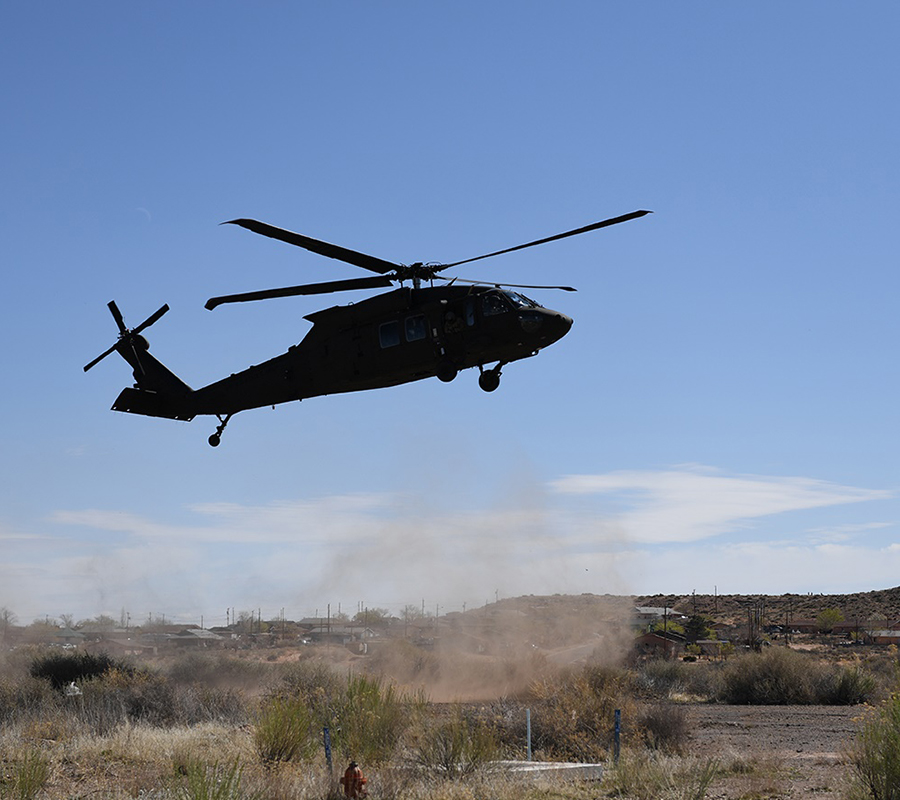 On Sunday, March 29 – a couple of weeks after Governor Doug Ducey announced a state of emergency for the state of Arizona – I was walking into work when I heard the low-pitched thump-thump-thump of a UH-60 Army National Guard Black Hawk. Finally, our call for help was answered. This helicopter was bringing the first of several teams that arrived at our hospital to provide supplies, equipment and staffing support for our immense uptake of COVID-19 cases. We, as a unified healthcare team, embraced the extended hand of the Army National Guard.