Anyone with Lungs Can Get Pneumonia, Including Our Pets

Animals are susceptible to many of the same dangers as humans—including lung diseases like influenza and pneumonia, as well as more chronic conditions like lung cancer, COPD and asthma. But it can be hard to diagnose these types of diseases when you don't speak the same language!

When Liz and Andrew adopted their first pet together—an 8-week-old, 8-pound Bluetick Coonhound from a local rescue shelter—they had typical first parent tendencies and were anxious when they noticed newly-named Nola wheezing the same day they adopted her. A quick call to the shelter raised suspicion for kennel cough, an infectious respiratory disease which can cause a dry cough, decreased energy, a poor appetite, and in severe cases pneumonia.

Nola's symptoms definitely fit the description of kennel cough, but the situation quickly escalated. By the second day in her new home, Nola couldn't stand on her own, her breathing was intensely labored and her gums turned blue, which usually means the blood is not getting enough oxygen. Liz and Andrew packed Nola up and took her to Ryan Hospital at Penn Vet where she was diagnosed with severe pneumonia and immediately put in an oxygen tank to help her breathe.

Oxygen therapy helps the lungs receive a higher than normal concentration of oxygen. The air around us contains about 78 percent nitrogen, 21 percent oxygen, 1 percent argon and other gases. An oxygen tank is commonly used for pets as masks can be hard to wear for some animals. When Nola was first taken into the hospital, her tank was giving her 80 percent oxygen.

Chances of survival for Nola were low. Her breathing was so labored that she was kept in the oxygen tank for 12 days. She also wasn't eating or drinking, and had to have a catheter inserted while at the hospital. She was given antibiotics for her pneumonia but Liz and Andrew were told not to keep their hopes up.

But it was love at first sight for the new family, and they weren't willing to give up that easily. While the pneumonia in her lungs was one of the worst cases her veterinarian had ever seen, Nola was able to recover enough to head home where she received an additional antibiotic treatment for three weeks.

Six months later, Nola is now 45 pounds and more energetic than her family could have hoped for! But the seriousness of lung disease—including in our beloved pets—should not be overlooked. Being able to get Nola to a caring and attentive facility surely saved her life. 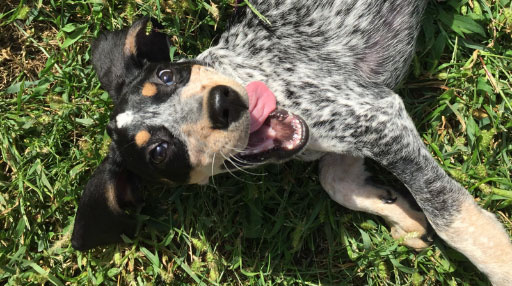 Has your pet ever had a lung infection or been diagnosed with a lung disease? Share your experience in the comments below!

Learn more about pneumonia (in humans).