Who Is Really Benefiting From the Tobacco Settlement Money?

ALERT: The Master Settlement Agreement involves a 1998 settlement reached between the nation's four largest tobacco companies and attorneys general from 46 states and territories. Despite recent reports on the internet, there is no provision for payments to individuals. The West Virginia Attorney General issued this alert in response to the incorrect information currently circulating.

You may or may not remember this, but there was a time when the tobacco industry even more openly and brazenly marketed tobacco products to our kids. It was then and continues today to be their business plan: they hook kids young, which can lead to a lifetime of addiction and tobacco industry profits.

And their profits come at our expense: Tobacco use causes or makes worse a whole host of diseases and conditions, including lung cancer and chronic obstructive pulmonary disease (COPD). Tobacco also eventually kills over a third of people who use it.

In the 1990s, policymakers finally stood up to the industry and acted. Congress held hearings and state attorneys general sued the tobacco companies. In 1998, almost every state in the U.S. came together to approve the largest civil settlement in U.S. history, the Tobacco Master Settlement Agreement (MSA). This court settlement between 46 states and the District of Columbia and the major tobacco companies forced them to end some of their more egregious marketing practices and provided for annual payments to the states for some of the medical costs of caring for the 16 million Americans who have smoking-caused illnesses. The settlement was huge: $206 billion over the first 25 years and the payments continue indefinitely into the future.*

When the settlement was signed, states made promises about how this money would be used to reduce tobacco use. Some states such as Alaska, North Dakota and Oklahoma have done the right thing by setting aside portions of these dollars for programs to prevent and reduce tobacco use based on the Centers for Disease Control and Prevention's (CDC's) Best Practices for Comprehensive Tobacco Control Programs -- 2014. However, the vast majority of states have failed to use the funds for their intended purpose - some have used them to fill budget holes or pay off debts. A couple of states have even in the past used it to benefit the tobacco industry. For instance, South Carolina gave 15 percent of settlement funds to tobacco farmers affected by the drop in prices for their crop**, while North Carolina used 75 percent of its settlement funds for tobacco production. Some of those North Carolina funds went to private tobacco producers, covering tobacco-curing equipment, a tobacco auction hall, video production for a tobacco museum and plumbing for a tobacco processing plant.1

This misuse of tobacco settlement funds continues to this day. According to the "State of Tobacco Control 2016" report, 40 states and the District of Columbia got a failing grade for spending less than 50 percent of what the CDC recommends should be spent on tobacco prevention programs in its Best Practices. That's over 80 percent of states that failed the test! 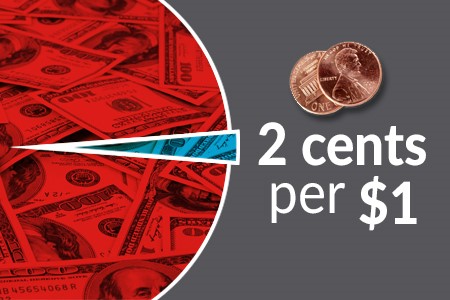 In total, states are spending close to $470 million on tobacco prevention and cessation programs in the 2015-2016 fiscal year. However, this is less than 2 cents of every dollar or close to $26 billion total that states receive from tobacco settlement payments and tobacco taxes each and every year.

The American Lung Association believes that states must use these tobacco settlement dollars, which are intended to compensate states for the healthcare costs from treating sick smokers and former smokers, and revenue from tobacco taxes to fund robust tobacco prevention programs to help tackle the #1 preventable cause of death in this country, tobacco use. Clearly, we have a tall mountain to climb though.

Learn more about your state's efforts on tobacco control at StateOfTobaccoControl.org and then please take action to let decision makers know that enough is enough - we need to end tobacco use once and for all.

*Four additional states settled separately with the tobacco industry prior to the 1998 agreement.